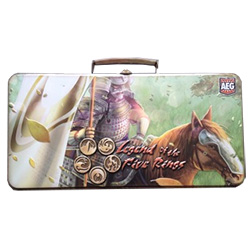 Legend of the Five Rings is the premiere interactive storyline Collectible Card Game. Featuring tales of epic Samurai adventure as the Clans of Rokugan fight one another for supremacy in court and the battlefields.

In the distant Colonies of the Emerald Empire of Rokugan, the arrival of the eldest Imperial heir, Iweko Seiken, has thrown the normal hierarchy into disarray. Samurai of the Great Clans are torn between their allegiance to clan, Governor, and the heir, and it seems certain that there are those who will exploit the situation for their own ends.

None can be certain what the future holds, but one thing is unquestionable: a storm is coming.

The Comic Storm is the first expansion following the highly anticipated Ivory Edition, the new base set for the fan favourite L5R. Featuring 16-card booster packs, it reinforces the emphasis placed on draft with Ivory and pushes it further with the release of the Draft Pack.

As the shakers and movers of the Empire begin their deadly political dance, loyalties and allegiances will be tested. Who will weather the storm the best?